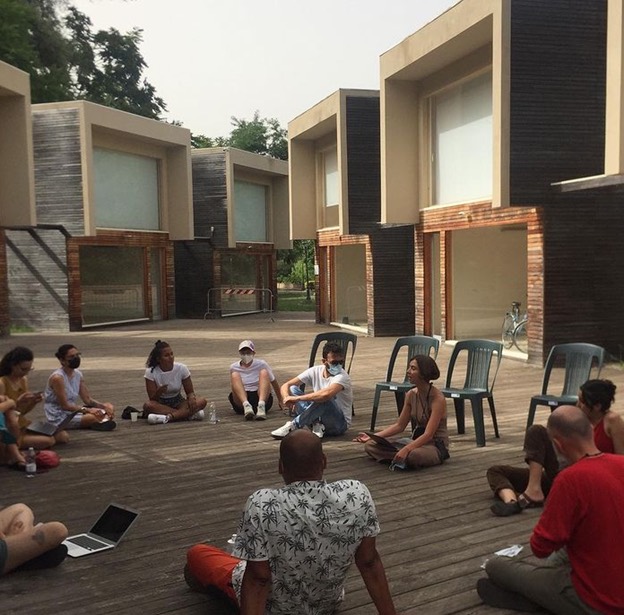 The Art Residency of MAREBOX Project, took place at the BoCsArt complex in Cosenza, Italy, from June 21st to July 2nd, 2021. The event was organized by 3D Research, a branch of the University of Calabria, in collaboration with Savvy Contemporary in Berlin and Atlantis Consulting in Thessaloniki.

The Residency hosted 20 international participants, both artists and professionals/scholars, from 9 interdisciplinary teams. Moreover, another team was selected for participating remotely. In total, 10 teams were selected among 163 proposals, submitted through the Open Call for Artists and Multidisciplinary teams: “Water Weighs-Tracing underwater memory, the sea’s life and its corporality”.

Within the MAREBOX project, we encounter the Sea as a time capsule that connects the past with the present and we aspire to bring to light stories narrated by the Sea through cultural expression, innovation, technology, creativity and artistic works under the core theme: Underwater Culture.

The main aim of the Residency was to mingle the cultural with artistic and creative sector and technology. During the Residency, several workshops, visits and speeches took place along with artwork creation, tutoring and supporting the teams. Through this creative process, each team will create a final multimedia and interdisciplinary artwork until the beginning of September. The artefacts will jointly form a travelling exhibition that will be hosted in 3 exhibition spaces in Europe: 1) Thessaloniki, Greece; 2) Berlin, Germany; 3) Cosenza, Italy.

During the official opening of the Residency, on June 22nd, Ms. De Sousa welcomed the residents on behalf of the Creative Europe Program and the European Education and Culture Executive Agency (EACEA). The official introduction in the project was made by Ms. Vicky Drouga, representing Atlantis Consulting (MAREBOX Project Coordinator), followed by presentations of the partner organisations. In the afternoon, residents presented their past and current work to each other, sharing creative ideas and setting common goals for the Residency.

During the Residency, dedicated time for artwork creation was given to all teams for working on their own projects, being at the same time an inspiration and a support for other teams. All participants took advantage of their presence in Calabria in different ways: meeting local people (professionals, scholars, fishers, immigrants etc.), recording, collecting data, exploring the beautiful sea localities, using the University facilities, etc. The Residency provided the teams with the opportunity and resources to work with and learn from VR/AR specialists, underwater photographers, archaeologists, chemists and other professionals, mostly coming from 3D Research and the University of Calabria.

The Residency was an opportunity for the residents to enhance their knowledge about the Mediterranean Sea and the related topics (immigration, archaeology, environmental studies, history of south Italy etc.). Participants were also inspired by the 11 dedicated speeches that were scheduled during the Residency, from: the Archaeologists Michele Stefanile and Francesco Cuteri, the marine biologist and expert of environmental regeneration Pietro Franco, the underwater photographer Francesco Pacienza, the F.L.A.G fishing Cooperative of Cariati Marina, the Delfino Cooperative who works with migrants, the Rivoluzione delle Seppie Association, the scholar Chiara Cartuccia, the Artist Elisa Strinna, the musicians Stefano Bruno and Alessandro Sessa and Angelos Manglis from Atlantis Consulting.

These speeches took place in the BoCsArt complex and in surrounding places such as the Swabian Castle and the Archaeological Museum of Bretti and Enotri in Cosenza, the Biodiversity Park in Catanzaro (that is also a contemporary sculpture open-air museum), the Aragonese Castle of Le Castella and the little maritime towns of Cariati Marina, Schiavonea and Amantea. In Cariati, many residents took part in a weekend near the sea hosted by F.L.A.G. cooperative, having the chance to meet local fishermen and other sea-related proffesionals. Moreover, in Amantea, the residents had a talk with Rita Adamo and other representatives of Rivoluzione delle Seppie, who work in regional urban and social regeneration projects.

The MAREBOX team would like to thank: Dr. Marilena Cerzoso, director of the Museum of the Brettii and Enotri, the Municipality of Cosenza, the University of Calabria and all the locals who supported the project with their work and humanity.

Special thanks to all participants for bringing their expertise and experience around the table and engaging in such fruitful, constructive and open exchanges throughout the 12 days of the MAREBOX Residency.